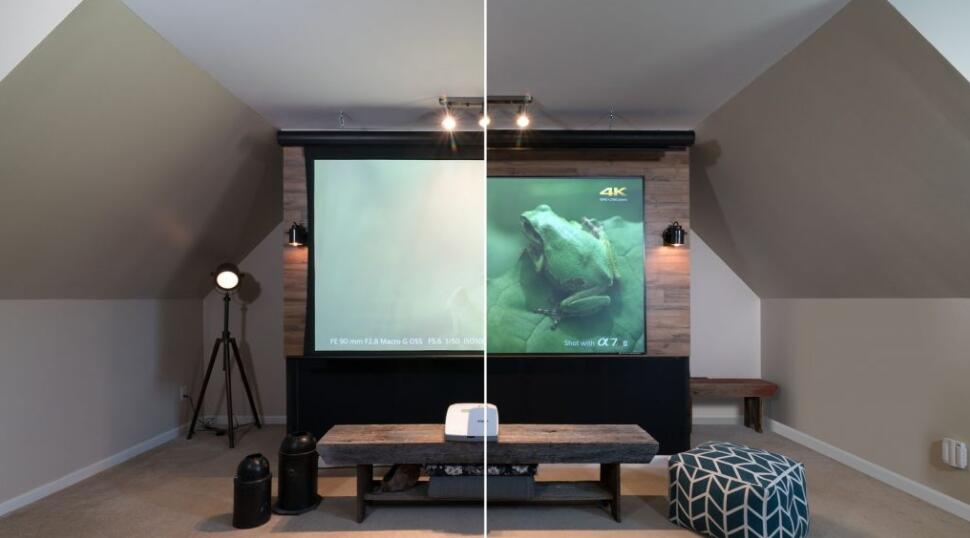 If you want to use a projector to watch your favorite TV shows or movies and have a big white wall or sheet handy, you might be wondering, “do I need a projector screen?”

It depends on the kind of experience you want and how permanent your setup is. If you’re looking to get a movie going straight away without much setup and you don’t plan to leave the projector where it is, a sheet or wall is fine.

But if you’re looking to get the most from your projector, a projector screen can make a world of difference.

Is a Projector Screen Necessary?

Strictly, no. A projector is merely shining a light on a surface, and if that surface is clean and reflective enough, then you’ll be able to see a picture on it. A white wall, white sheet, or another light-colored semi-reflective surface will do just fine in a pinch. If you want the best image possible, and want to see what your projector can do, though, then a projector screen is well worth the additional investment.

Projector Screen versus Wall – Which Is Better?

The projection screen is better than a wall when it comes to featuring a projection from a projector. To be more specific, a projector screen is built specifically in order to accommodate a projector while a wall isn’t. Even if you modify a wall in order to make it better suited for projections, like putting reflective paint on it or smoothen it out, it will still ultimately be inferior to using a screen.

Many people wonder which is better, the projector screen or the wall. Or rather, they’re curious whether or not it’s possible to use a projector without a screen so that they can save a couple of bucks from buying such an item. Is a projector screen even necessary when push came to shove?

Is a Projector Screen Better than a Wall? I would say the answer is ‘yes’, a projection screen is better than a bare wall.

A screen provides the best quality and highest definition possible. Light reflection is the key and a wall simply cannot match that of a screen. An ultra-smooth surface is what reflects light best and since most walls have flaws, cracks or bumps, projection screens are far superior in this aspect.

Projector screens also have a special coating on them which increases their light reflecting abilities. A typical wall doesn’t have this coating (unless you plan to sand it, prime it and paint it with a special ‘projector paint’ beforehand). Therefore, images projected on a bare wall, even if its white, won’t be near as clear or bright as those shown on a projector screen.

How to Use a Wall as a Screen Projector

As I mentioned earlier, it’s not ideal to use a projector with no screen. So if you want to select a wall to use slightly of a projector screen, then this can do few things to increase the quality of the image projected.

Smoothen The Wall as Much as Possible

You want the wall to be as flat and with the as little exterior as viable. As I mentioned, small lumps and clefts on the wall will induce miniature darknesses to seem.

First, you will need to turn off the lights and use a torch or project a picture onto the wall if you have a projector already. This screen will help distinguish any problem zones. Use a pencil or something else to identify these areas correctly.

Once these areas are marked, scour or a power sander to flatten the wall. You will need to stand and draw the wall multiple times to get the wall smoother as early as possible. A smooth wall is the symbol of a happy wall!

The finest solution for using a projector on a wall is to draw the wall with a projector screen paint. It is not 100% necessary, but it admits the wall to showcase the light more effectively. This type of design is that it’s not low-budget.

The finest solution is to use multiple shells of screen paint, but you will probably need more than a quart to do so. Most of the time, you will use white screen paint; however, if your projector has a very high lumen count (around 3,500), consider using gray.

Securing 3,500 lumens onto a white screen will feel a bit blinding. The screen would reflect an immense amount of light directly at your eyeballs. But most of the time, plain white screen paint is the best option. You don’t have to paint the wall with specific screen paint, but it is a great addition.

Create a Frame Around the Projected Image

A frame is an important addition to any screen! After having a prominently border around the screen helps the spectator focus on the higher quality Picture. This screen is essential than you think, I promise! Almost all market screens have a black outline around the projection area because it boosts the picture grade.

It gives a clear starting and finishes it to where the picture is estimated. The frame typically helps the eye maintain center on what is being exhibited and not where the screen’s border is fixed.