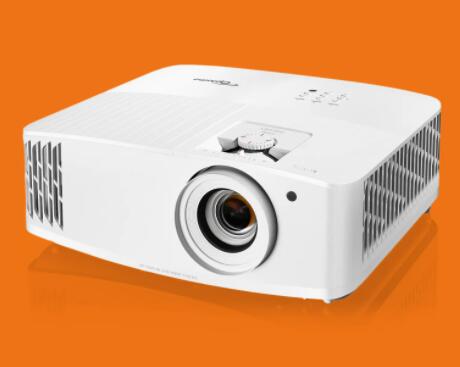 Even though TVs keep getting bigger, projectors come closer to truly re-creating the viewing experience of a movie theater. Whether you prefer movies, sports, gaming, or a mix of entertainment, a larger screen is the most impactful upgrade you can make. The biggest TV we currently sell is 86″, while many projector systems have screens that are 120″ or larger.

I got my first projector about 10 years ago — a Sony HD model that I use with an 84″ screen. Recently, as 4K TV screen sizes have grown and their prices have shrunk, people have asked me if I’ll keep using a projector or switch to a TV.

I plan to stick with a projector because I find the natural look of projected images easier on the eyes — there’s no glare from looking through a sheet of glass. But it’s a matter of taste, and projectors don’t make sense for everyone and every room.

What’s Inside a Projector?

Before you wade into projector shopping it’s helpful to understand how they work.

In the most simplistic terms, every modern digital projector has three primary components: 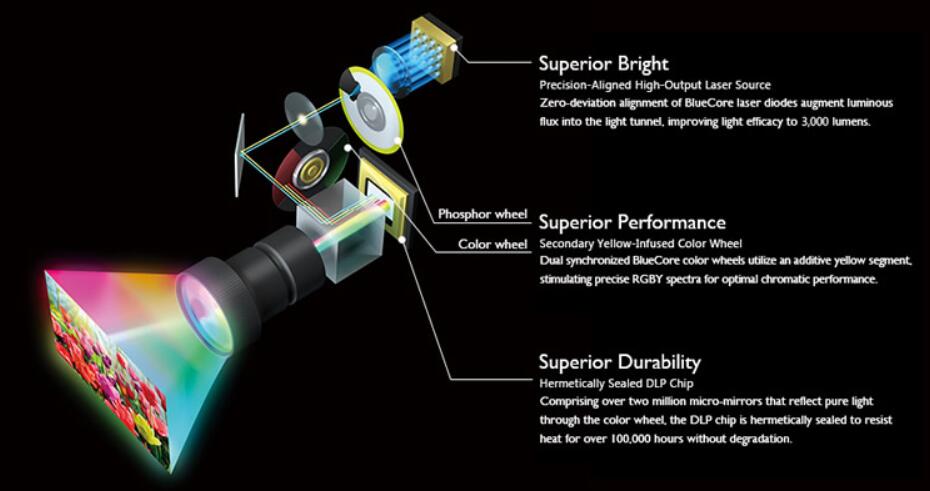 Today, film has been almost completely replaced by digital-video projectors that are based on one of three imaging technologies: LCD, LCoS, and DLP. All of these technologies offer many advantages over film and CRT projectors—smaller size, lower weight, less heat generation, and more efficient energy usage—and each one has its own strengths and weaknesses for different applications.

By far the most popular technology found in projectors of every type and size, Digital Light Projection is an invention of Texas Instruments that has revolutionized the projection world. DLP projectors utilize one or more electro-mechanical imaging devices called DMDs, or Digital Micromirror Devices.

These present an array of tiny, pixel-sized mirrors to the light source—as many as 8.3 million in a native 4K-resolution DMD measuring just 1.38-inches wide. The mirrors each pivot on their own post, and can be independently positioned to direct a point of light to the screen or to dump it into a light-absorbing area, thus leaving that pixel dark. The mirrors oscillate at different speeds to brighten or darken the pixels as needed.

LCD projectors shine a light source through translucent liquid-crystal panels whose pixels can be individually opened or shuttered by the video signal to make them brighter or darker. As noted, separate LCD imaging chips for the red, green, and blue picture elements are typically employed, hence the “3LCD” branding associated with them. Several manufacturers make 3LCD projectors for business, education, and other commercial applications, but Epson remains the only major brand selling LCD projectors for home theater.

LCoS, or liquid-crystal-on-silicon, is a variant of LCD. Instead of light passing straight through the LCD panel, it is enters through the front, hits a reflector, bounces out, and is directed through the lens to the screen. LCoS is more expensive than LCD but offers some key benefits, including the valuable potential for lower native black level and high contrast.

It’s easy to understand that a projector’s sharpness would be undermined by a poor lens or other optical elements placed in the light path. The best lenses are made of high quality glass, with multiple elements (and “groups” of elements) that help eliminate aberrations—usually, the more elements, the better and more expensive. Today’s 1080p-resolution budget projectors in the $500 to $1,000 range from the major brands come with surprisingly good lenses and deliver sharp and essentially uniform images.

When you step up to UHD/4K-resolution, the lens requirements shoot up, which—along with the more expensive imaging chips—is a factor in the higher cost of 4K projectors. If a projector manufacturer has gone out of their way to tout the optical quality of their lens (beyond mentioning its zoom or lens-shift features), it’s because they want you to know they’ve paid attention to this important component and that it’s one of the things you’re paying a premium for.

6 things to know before you buy a projector 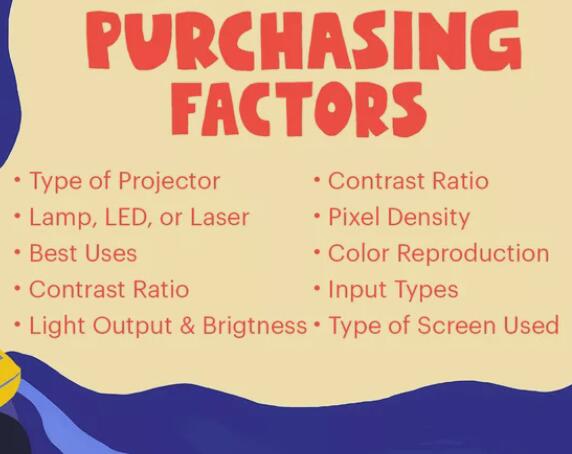 Projectors have long been used as a presentation tool in business and commercial entertainment, as well as in some high-end home theater systems. However, video projectors are becoming more available and affordable for most people. Check out some of these useful tips before you buy your first video projector.

Keeping few factors like these in mind can help you with your shopping experience. A mini projector is compact and offers an easy setup. You can carry them outdoors with ease and there are so many options available to choose from. We hope our blog helps you. D Projector ranks and reviews hundreds of projectors based on video output, audio quality, build quality and overall customer satisfaction. Browse through to know make an informed buying decision.

One of the most important specifications for projectors is “lumens,” which describes how much light a projector can create. This, in turn, determines how bright the image is and how big you can make it. There are a lot of problems with this spec. For one, other than the distinct “ANSI lumens” there’s no agreed-upon way to measure lumens. One company’s 3,000 might be another’s 3,500. Most manufacturers don’t specify ANSI lumens, which would be easier to compare across brands.

You can compare broad strokes however. Generally speaking a 3,000-lumen projector is probably brighter than a 2,000 model. But if you’re trying to choose between 3,000 and 3,100 lumens, good luck. Even if those numbers were accurate, that little of a difference probably won’t be visible anyway.

Projectors create light and image separately. A light source creates the light, which is then focused on an image-creating chip. Modern projectors use one of three technologies as light sources: LEDs, lasers and UHP (ultra high pressure) lamps.

UHP lamps, which are basically high-powered light bulbs, are by far the most common. These are capable of creating a lot of light and have the added bonus of being fairly inexpensive. The downside is they degrade over time. A UHP projector will never be as bright as that first time you turn it on — until you replace the lamp.

This aging is a slow process though. We’ve reviewed several that, in certain modes, have lamps that can last 15,000 hours before you need to replace them. So if you watch the projector for four hours every night, that means the lamp will last over 10 years. Prices vary, but typically a new lamp will run you $100-$300. More expensive projectors have more expensive lamps. Go figure.

After the UHP lamp/LED/laser creates the light, some kind of chip manipulates that light into an actual image. There are three technology types when it comes to projector chips: DLP, LCD and LCoS. We go into these technologies into greater detail in DLP vs LCD vs LCoS: Projector tech pros and cons, but here’s a short list of the highlights:

Now that you’ve got the basic tech down, it’s worth considering where in your house you’re going to put the projector. That might limit which projectors you can buy, as some might not fit where you want them to.

Affordable single-chip DLP projectors typically have very little, if any, lens shift. This means that you can’t adjust the height of the image without moving the projector. These units also typically have an upward throw angle, meaning the bottom of the image is at or above the top of the projector. Because of this, they have to be mounted either on the ceiling, or on a coffee table. It’s difficult, if not impossible, to place them behind a couch on a stand and still have a normal-looking image.

Many LCD and nearly all LCoS projectors have lens shift, so they’ll work in far more places.

Color reproduction is another important factor to consider. Check for natural flesh tones and color depth, how colors look in the brightest and darkest areas of the image, and the degree of color stability from input to input, and that you get familiar with the types of picture settings that video projectors offer. Everyone has a slight difference in color perception and what looks pleasing to them, so look carefully.

Most new projectors have a USB connection that will let you power a streaming stick which plugs into an HDMI input.

One option to consider is fiber optic HDMI cables. These have HDMI connections at either end but send the signal optically. These are typically thinner than long-run copper cables. Monoprice has some options for around $2.50 per foot, compared to $0.70 for an equal-length, equally-capable copper cable.

Another option is wireless. These are typically more expensive than cables, and might not offer the resolution/frame-rates you’re looking for. Some will drop the signal if you walk between the transmitter and receiver, and won’t work if placed in a cabinet.

What about 3D home theater projectors?

What do I need to know about lamp life?

LCD and DLP projectors typically have a lamp life between 2000-4000 hours. This specification is actually referring to the ‘half-life’ of the lamp, the point where the lamp is half as bright as it was new. The lamp will still work at its half-life, but it will continue to gradually lose brightness. Longer lamp life means less expense in maintaining your projector.

If you are planning to use your projector to replace your current television, lamp replacement cost should be factored into your purchase. Replacement lamps run approximately $200-$400.

If your projector will be used primarily for watching movies and special events, lamp life won’t be as important.

Should I install my projector or set it on a tabletop?

One choice you should make early on in your purchasing decision process is whether you want to ceiling mount your projector or simply put it on a tabletop when in use. Each option has its advantages.

Most video projectors weigh less than 20 pounds and are easy to transport from location to location. That means you can take your ‘big screen TV’ with you to the homes of friends and family, or host an outdoor movie projected on the garage door without any heavy lifting.

However, you will have to set up your projector for each use, and your primary viewing area will not have the polished look of an installation. If you decide that tabletop projection is right for you, consider a projector with less fan noise. Aim for around 30dB or less for ‘whisper quiet’ fans. You may also want to consider the overall product’s exterior design since the projector will be visible.

What type of room will you use the projector in?

This question is particularly important for movie enthusiasts because it affects how much you should spend on a projector. Do you have a dedicated theater room in which you can fully block out extraneous light, or do you watch movies only at night with the lights off? Do you want to have a truly cinematic big-screen experience and see all the finest details in your favorite dark, moody thriller? If so, it may be worth paying more to get a higher-end home theater projector that can deliver an image with truly deep, dark black levels and an especially high contrast ratio that results in a richer, more engaging picture.

These projectors often use higher-quality lens systems that allow for better contrast and crisper images, but they’re also bigger and heavier—so you’ll likely want to place them permanently in a projector mount attached to the wall or ceiling, as opposed to setting them on a table or shelf.

A home theater setup with a video projector at its centerpiece can really elevate the home entertainment experience. However, just don’t reach into your wallet and buy whatever is promoted or on sale.

Video projector prices vary widely from several hundred to several thousand dollars, depending on all of the above factors. Unless projecting onto a wall, you also have to consider the cost of a screen, which comes in similar price ranges.