How To Watch 3D Movies On a Projector

Does your projector have 3D capabilities? If it doesn’t, it will probably not be able to play 3D movies without adding a few things. Even then, it might be a tall order.

You cannot play 3D movies using a normal projector, because standard projectors do not have the hardware to pick manage 3D signals. This means that they will not be able to interpret 3D image data or project 3D images. 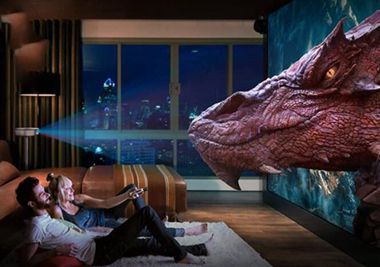 If you’re a person who likes the idea and experience of watching 3D movies and shows in your home theater, then you should be prepared to wear special glasses and/or avail of a screen that makes the flat image look almost holographic to your eyes. Most complications arise from the paraphernalia but if you’re reasonably tech-savvy, you should be able to take care of everything.

How 3D Movies Work in a Home Theater Environment

The special technology needed to make 3D movies and shows work is where the complications arise. Naturally, the cost will root from them, from special 3D films to special 3D DVD/Blu-Ray players to special HDTV screens and/or 3D glasses to view them. HDTVs and computers with 3D graphics are also available to render the flat images in a way that gives them the illusion of depth. Projectors can make use of the same technology. 3D glasses are usually a must but sometimes they’re not.

The 3D-Enabled Video Projector and Other Displays

Ostensibly, a 3D-enabled projector should be your starting point in viewing a 3D movie using such a device. For TV, it’s about getting an OLED, LCD/LED, or plasma HDTV (although plasmas were discontinued in 2014 to early 2015). For projectors, it’s about getting LCD (Liquid Crystal Display) or DLP (Digital Light Processor) ones. LCoS (Liquid Crystal on Silicon) projectors with 3D capabilities are much rarer since the leading brands are mostly LCD or DLP. These devices work with 3D standards approved for streaming sources, cable/satellite, or Blu-Ray/DVD.

2D Mode is an Option for 3D-Enabled Projectors

Many 3D-enabled projectors, TVs, and computer monitors display standard 2D too. This way, you won’t have to end up with a projector that you can only use for 3D movies. It can also play standard TV programs from your cable/satellite or streaming services like Netflix, Amazon Prime, or Hulu as well as DVDs, CDs, and other video content like you’d normally have in a regular projector, HDTV, or computer monitor. You can see them in the way you’re used to seeing them and then turn on the 3D mode in order to see a 3D movie with more depth and perspective so that you can get the best viewing result possible.

The Importance of 3D Glasses

Like with the old black & white (or rather, monochrome red and blue images overlapping each other) 3D, you need special glasses to be able to correctly see a 3D movie. The viewing position of your 3D media should be correct so that your 3D glasses can get the right angle and depth perception needed to make the 3D really pop or feel deep instead of as flat as a picture. There are two types of glasses—Active or Passive.

How do you choose the most suitable 3D glasses to pair with my projector?

Another major factor that affects your ability to view high-quality 3D video is your choice of 3D glasses. This is because 3D glasses are responsible for ensuring that the alternating (left, right, and so on) frames in the frame sequential 3D ecosystem are seen by the correct eye. There are 2 major types of 3D glasses on the market today: passive 3D glasses and active 3D glasses. 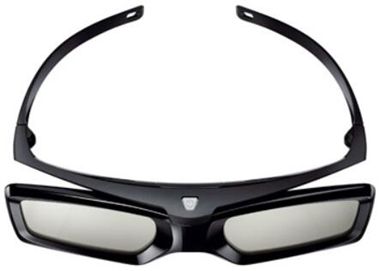 Active 3D glasses are glasses that use lenses that rapidly turn transparent or opaque depending on which frame is being projected by the 3D ready projector. In other words when a frame intended for the left eye – based on the rules of frame sequential 3D – is projected the left lens on a pair of active 3D glasses will turn transparent, while the lens on the right eye will turn opaque, and vice versa for a frame intended for the right eye. The lenses themselves are able to discern which eye each frame is intended for due to an IR sensor embedded in the glasses which receives a signal from either the projector or an external IR emitter indicating the correct eye for each frame.

Due to the technology and components employed by active 3D glasses their prices are invariably higher than passive 3D glasses. But since they are meant to work with the average 3D ready projector by design, they do not require the additional purchase of a costly polarizer module and are thus the default glasses for use with 3D ready projectors on the market today.

How to set up the projector for 3D viewing

Turn off the projector.

Set the 3D Sync Transmitter in a place where it is free from obstruction.

Connect the 3D source device to the projector using a High-Speed HDMI® cable. (For more information regarding the HDMI cable required for 3D viewing visit https://www.hdmi.org.)

If using a 3D capable Blu-ray Disc® player or PlayStation® 3 (PS3) console, insert a 3D movie or game title. If you have subscribed to 3D programming through your cable or satellite provider, tune the receiver or set-top box to the station with 3D programming.

Using the supplied remote, turn on the projector and press the INPUT button to select the appropriate HDMI input.