Projector Colour wheel work when it comes into play on one-chip DLP projectors which are, by definition, monochrome devices. In a one-chip DLP projector, all that the chip can do is either send or not send light – making it black-and-white only. To create color images, projector manufacturers include a color wheel which rotates in synchronization over the DLP chip.

As it rotates between red, blue and green, the DLP DMD chip sends the correct pattern of light. Because the images go on and off the screen so quickly, the brain puts them together into one full-color image. This is similar to how the brain perceives the series of still images in a movie as an actual moving picture.

What is Color wheel? 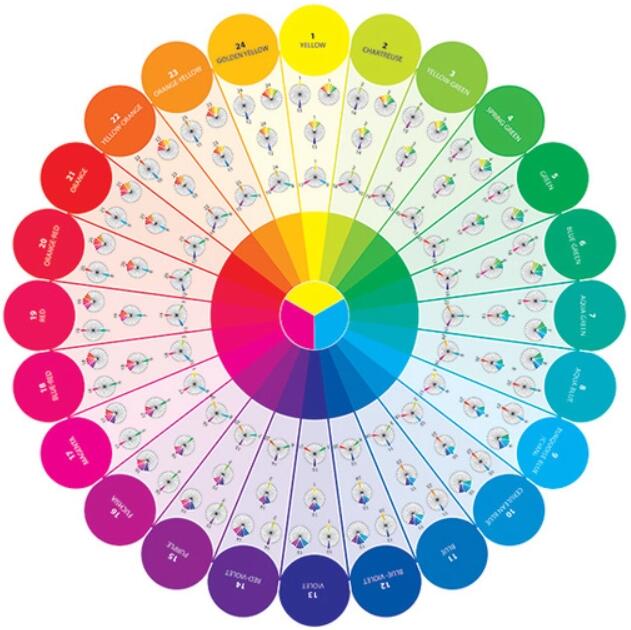 A color wheel or color circle is an abstract illustrative organization of color hues around a circle, which shows the relationships between primary colors, secondary colors, tertiary colors etc.

Some sources use the terms color wheel & color circle interchangeably; however, one term or the other may be more prevalent in certain fields or certain versions as mentioned above. For instance, some reserve the term color wheel for mechanical rotating devices, such as color tops, filter wheels or Newton disc. Others classify various color wheels as color disc, color chart, and color scale varieties.

Colors of the color wheel

Most color wheels are based on three primary colors, three secondary colors, and the six intermediates formed by mixing a primary with a secondary, known as tertiary colors, for a total of 12 main divisions; some add more intermediates, for 24 named colors. They make use of the trichromatic model of color.

A 1908 color wheel with red, green, and violet “plus colors” and magenta, yellow, and cyan blue “minus colors”.

Non-digital visual artists typically use red, yellow, and blue primaries (RYB color model) arranged at three equally spaced points around their color wheel. Printers and others who use modern subtractive color methods and terminology use magenta, yellow, and cyan as subtractive primaries. Intermediate and interior points of color wheels and circles represent color mixtures. In a paint or subtractive color wheel, the “center of gravity” is usually (but not always) black, representing all colors of light being absorbed.

A color wheel based on RGB (red, green, blue) additive primaries has cyan, magenta, and yellow secondaries. Alternatively, the same arrangement of colors around a circle can be described as based on cyan, magenta, and yellow subtractive primaries, with red, green, and blue being secondaries. Sometimes a RGV (red, green, violet) triad is used instead. In an additive color circle, the center is white or gray, indicating a mixture of different wavelengths of light (all wavelengths, or two complementary colors, for example).

How the Color Wheel on a Projector Works

Running a DLP projector’s light through red, green or blue filters has the effect of slightly dimming the picture. To solve this problem, some color wheels have an additional clear segment which lets the projector’s bulb shine through and increase the brightness of the image. Because doing this can also wash out the image and make it less colorful, some color wheels include extra segments with non-primary colors like yellow or magenta.

Drawbacks of the Color Wheel

The key drawback of the color wheel is the “rainbow effect.” While most people perceive a DLP image as being of continuous tone, some people’s brains actually see the different colors being projected separately. This can be especially noticeable where white and black meet – like with a projected spreadsheet of black text on a white background. In an attempt to alleviate this problem, some manufacturers speed up the color wheel, making each individual color show up more times in a second for a shorter period of time. This can make the “rainbow effect” less visible for many people.

Alternatives to Projectors with Color Wheels

There are two popular alternatives to projectors with color wheels. The first is to use a DLP projector with three chips – one for each color. These projectors have excellent image quality and no rainbow effect, but are both bulky and expensive. The other alternative is a projector that uses liquid crystal display technology. These projectors offer better color accuracy and brightness than many DLP projectors, but are sometimes larger and may also have slightly lower contrast.

We all have heard that a projector DLP technology uses an animated color wheel to create colors in the picture … and that is the reality.

This figure meant that every second in our picture fall color blue 60 times, the color green 60 times and respectively the red color more than 60 times. This frequency can be defined as a chromatic frequency 60 Hz.

The white part on the color wheel was added by manufacturers in their effort to improve the brightness of the projector and the clarity of the image. The above i.e. wheel 4 wheel segment considered.

Then and then complains about viewing rainbow companies have improved the speed of the color wheel. For the accuracy of their speed doubled from 60 revolutions per second to 120 (7200rpm). So we spent in 120Hz. The so-called 2 x speed.