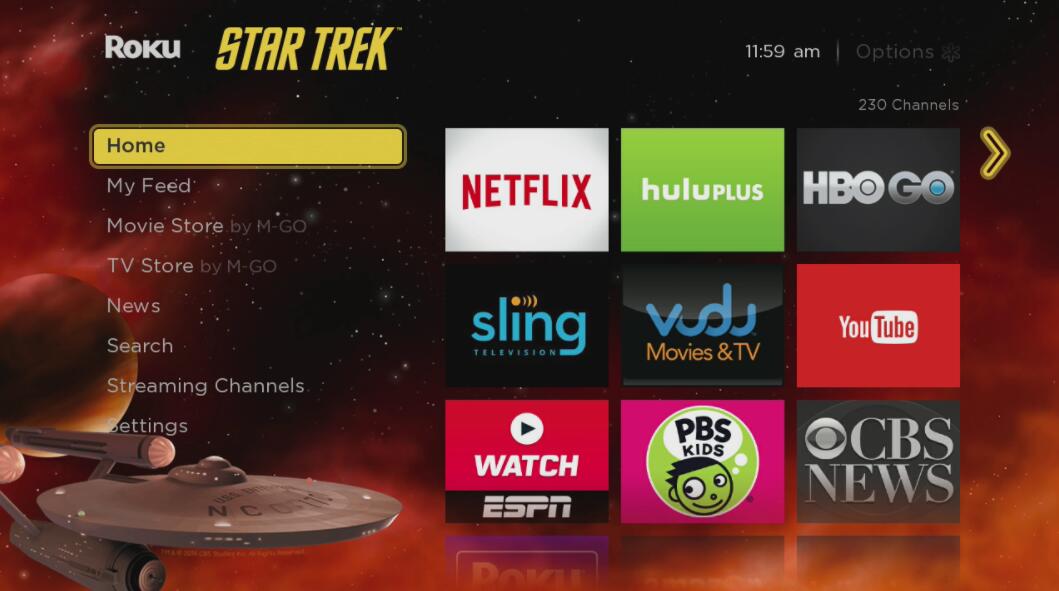 Roku and Google Chromecast are two of the most popular budget devices for streaming popular content at home. The two types of devices are designed to make it as simple as possible for users to watch their favorite streaming services through their TV. However, they both provide this capability in completely different ways.

Roku provides a range of streaming devices that users connect to their TV either directly or via an HDMI cable and control with a remote. Users can then choose from tens of thousands of channels on the Roku Channel Store, which they simply download, log in to, and start watching. The service is increasingly now available directly on Roku technology-powered smart TVs.

In contrast, Google’s Chromecast devices plug into the TV and enable users to cast their favorite content from their mobile phone, which acts as their remote control, or via a Google Chrome browser window on a Mac or PC. Chromecast users can watch any streaming service that provides Google Cast support, such as Disney+, Hulu, Netflix, and YouTube.

This article will explore what’s the difference between Roku and Chromecast and help users to find the right device for their streaming requirements. Head here for an in-depth review of everything Chromecast has to offer.

Which Media Streamer Is Right for You?

They’re all very good platforms with plenty of apps and services, and they all have excellent media streamers available for under $50. The Chromecast With Google TV has our favorite voice assistant, but lacks Apple TV. The Fire TV Sticks have Apple TV, but lack Google Play services, and Alexa, while useful, isn’t as simple to use as Google Assistant. Roku has the best selection of services, but doesn’t have a voice assistant.

The best streaming hub for you is a matter of taste and technology. If you have a 4K TV, you should be prepared to spend at least $49.99 for the Fire TV Stick 4K, the Chromecast With Google TV, or the Roku Streaming Stick+. If you still have a 1080p TV, you can spend a bit less (though not with Chromecast). The big question is what you want to watch and where. Amazon, Netflix, and Hulu are all covered by the three services, but if you want to watch an Apple TV+ show, you should count the Chromecast out. Similarly, if you want Google Play services, you should buy a Fire TV Stick.

Ultimately, all three platforms are easy to recommend, and all three $49.99 4K media streamers are excellent. But there isn’t a single one that can do absolutely everything you might want it to. So consider what you want to watch, then take your pick.

The cheapest of the six Roku products is the Roku Express; it costs $29. The most expensive device is the Streaming Stick +, which will set you back $59. That means there’s only $30 difference covering all six Roku dongle devices.

The standard Chromecast costs $35. That’s the same price as a Roku Express + and just $4 cheaper than the re-released Roku Premiere. A Chromecast Ultra, which adds 4K support, costs $69.

If you want to buy a Chromecast or a Roku so you can cut the cord, the narrow spread of prices means costs shouldn’t be a significant consideration. After all, the average cable bill in the US is more than $100/month; you could buy any of the models and still save money.

The biggest difference between the Chromecasts and the various Roku products is the user interface.

Chromecasts do not offer an on-screen interface. They’ll simply mirror your phone, tablet, or computer screen on the TV. (That’s why you can use Chromecast as a second computer monitor.)

You set up and manage your Chromecast via the Google Home app. Which is available on Android and iOS.

All the devices connect to your television via an HDMI port.

The only exception is the Roku Express +. In addition to HDMI connectivity, it also offers composite A/V ports. If you have an older TV that doesn’t have HDMI ports, the Express + is the only device that will work for you.

Of the two Chromecast products, only the more expensive Chromecast Ultra supports 4K.

Before you run off and buy a 4K model, stop and think. Firstly, does your TV even support 4K? It’s not yet commonplace across mid- and low-end products.

Secondly, do you actually watch 4K content? Remember, many popular streaming services will charge you more if you want to stream in 4K.
For example, the cheapest Netflix plan is $7.99/month, whereas the 4K plan is $13.99/month. And, even if you pay for 4K access, not all the shows and movies are available in 4K.

All Roku devices come with their own remote control. The three cheapest models have a simple remote; it lets you control your Roku and little else. The three premium models ship with a voice remote.

As you’d expect, the voice remote lets you search for content verbally. However, it also includes a TV power button and volume controls, meaning you can dump your TV remote and have fewer gadgets lying around.

Lastly, you can download a Roku app on both Android and iOS. It lets you control your device and switch between the various Roku devices in your home easily.

In contrast, Chromecast devices are controlled entirely from your mobile device or computer. Because they cast your screen, any inputs you make locally will be reflected in what you see on your TV.

Visuals and Channels: They’re All Covered

None of the three has a clear advantage in compatibility with the highest-resolution picture and sound. If you have a 4K TV, you can find a Roku, Fire Stick, or Chromecast that can handle those images.

Older Chromecasts had a clear limitation in that they didn’t support local playback; that is, you could only watch the content you streamed from your phone or tablet. But newer models have caught up to the others by providing a dedicated interface and phone-free use, so this is once again basically a three-way tie.

You can say the same for the available channels since every family of devices will let you watch programming from HBO, Showtime, and even Apple’s TV+. Chromecast may have a slight advantage here, though, since it provides the fastest “in” to Google’s YouTube TV platform, which includes local channels and the ability to record live programming and watch it later.

Having said that, however, YouTube TV is also available on both Roku and Fire Stick devices, but the Chromecast will at least save you a login because you’ll already be signed in to your Google account to use it.

If you live and breathe gaming, Chromecast will give you a broader selection of titles to choose from because it lets you cast any game from a mobile device. That said, most games aren’t optimized for casting, so you may notice some input lag.

With Roku, games are installed on the actual device and controlled by the remote. Angry Birds, for example, uses motion-control to help you target and fire. However, the limited selection and lack of a dedicated controller may frustrate some gamers.

Regardless of which company made your streaming stick, a model is available that includes voice searches. This feature is an inherent advantage in any device since it saves you time and effort by letting you ask for what you want to watch instead of typing it into an on-screen keyboard using your remote.

The “flavor” of the voice interface does differ, however, and it can come down to your preference. If you’re used to talking to Alexa, you’ll have no trouble getting accustomed to voice searching on a Fire Stick. If Google Assistant is more comfortable, the Chromecast will be a quick learner.

None of the three has a clear advantage for specific searches; they should all be able to understand you just fine if you ask to watch Moana, for example. Alexa and Google Assistant may provide better options for natural-language search (e.g., “Show me musicals from the ’60s”), with Google’s A.I. tech possibly giving it a slight advantage.

Is there a monthly fee for using Chromecast?

No, the only price you’ll pay is the upfront cost for the device. However, what does cost money is the monthly subscription price of various streaming services. For instance, the large streaming services like Netflix and Hulu have Chromecast support, but you still have to sign up and pay the monthly fee to use those services.

What can Chromecast do?

Once your plugin and set up your Chromecast, you can use your phone or computer as a remote control to play content on your TV. You can also mirror your device’s screen or cast your Chrome browser to the TV.

Can you watch Disney Plus on Roku?

Yes, there is a Disney Plus app available on most new Roku devices, including the Roku Streaming Stick+. Older models do not have updated software and are not compatible with newer apps.

Do I need a Roku for each TV?

Your Roku Streaming Stick+ plugs into the HDMI port on the back of your TV and it will only work with the TV it’s plugged into. You need a separate Roku for each TV unless you want to switch it back and forth every time you watch a different TV.