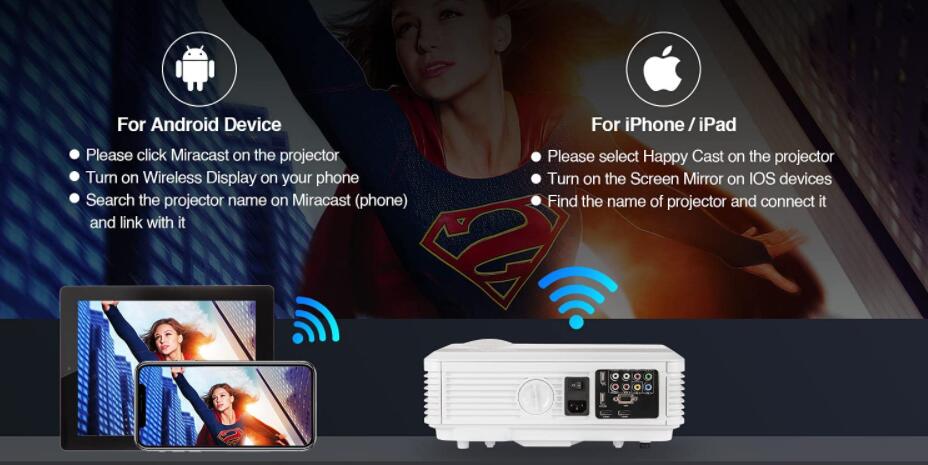 You might picture a projector as something that takes up a ridiculous amount of space, only to output some pretty poor video quality, you need the best wireless projector with WiFi and Bluetooth. They’ve been the go-to way for years to play or project a movie onto insanely large screens. And while projectors still do the same thing today, they’ve gotten better — improved video quality, added Bluetooth and WiFi functionality, and they’ve become a whole lot more portable.

Pico or pocket projectors are a little larger than smartphones. Because most of them can accommodate videos and photos for on-the-go entertainment (in addition to slides and charts for business or classroom presentations), these models can be thought of as multimedia display systems. Though convenient and snazzy, they tend to be of low brightness and relatively expensive for their performance.

So-called palmtop projectors are larger (and generally brighter) than pico projectors, typically a bit too large to fit comfortably in the palm of your hand, even with your fingers outstretched. Still, they are lightweight enough that you wouldn’t think twice about packing one in a bag or a backpack. Most are brighter than pico models, and have more connection options.

What Are the Best Bluetooth Projectors?

There are many factors to consider when choosing the best bluetooth projector for you; below are the most important ones, which we considered while we were researching this list.

Native Resolution: A lot of projectors accept HD content, but very few of them can actually produce an HD image. Many of them use a technology called “downsampling,” which means it takes a high resolution image, and scrunches it down to a lower quality one. Think of it this way: You could play a Blu-ray on an old tube TV.

Throw Distance: This is a math equation that calculates how big a projector’s image will be based on how far away it is from the screen or wall it’s projecting onto. The further away the projector is from the wall, the larger the image will be. Some projectors are categorized as “short throw,” which means they’re calibrated to throw a larger image from a shorter distance.

Brightness: The image thrown by a projector is highly susceptible to light pollution, which will dim its image before it hits your screen or wall. The brighter the projector, the more it’s able to overcome light pollution. Unfortunately, the brighter the projector, the lower the battery life. If you plan on using your projector at night, brightness won’t be as big of a factor, but it’s something to consider if you’re going to use it to replace your TV in a well-lit room.

Weight: The biggest upside to having a portable projector is its portability, so it’s important to factor in weight. All of the projectors on our list weigh less than five pounds, and will fit in a backpack, but this is definitely a factor to consider if you’re planning on carrying your projector around a lot.

Ports: Portable projectors are smaller than the ones used in home theater systems, which means they don’t have as much room for ports. Ports let you connect computers, game consoles, phones, or tablets to the projector, so the more ports the better.

Speakers: All of the portable projectors on this list have built-in speakers, so you don’t have to carry a pair around with you to watch a movie. That said, the speakers are generally smaller, and less powerful because of space restraints, and can add to power consumption.

Battery life: Portable projectors are a battery power balancing act: brightness, speaker size, weight, and resolution all play a part in how much time you’ll get to use them per charge. Most have different power settings, which gives you some control over how long they’ll last, but in general you should expect to get through one or two movies without much trouble. 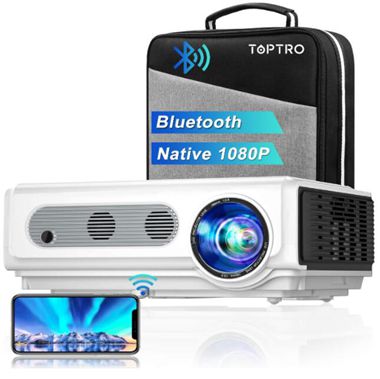 The TOPTRO Wi-Fi Projector is a featureful Wi-Fi and Bluetooth projector that supports native 1080p full HD video resolution. Furthermore, it comes with the advanced Bluetooth 5.0 chip, allowing you to connect the projector with different Bluetooth speakers and headphones to enhance the sound experience.

Furthermore, you can access all the buttons from the top. There is an IR window that you can use with remote control. Lucky for you, the TOPTRO projector includes multiple ports at the back, such as HDMI, VGA, USB, AV, and SD card.

The 7,500 LUX lumens allow you to watch movies on the projected screen in a well-lit room. Additionally, you can adjust the brightness and screen size using a remote control.

You can also change the settings and select the picture mode to be vivid to enjoy high-definition resolution. The edges are sharp because this Bluetooth projector retains the bright color throughout the picture frame, courtesy of the 6000:1 contrast ratio. 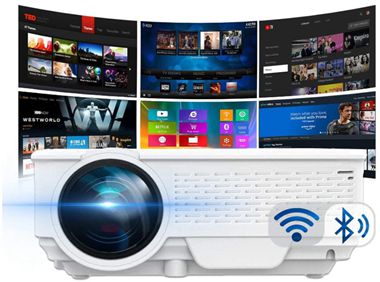 The Smart Projector by SinoMetics is one of the best wireless projectors with Android 8.0 Wi-fi and Bluetooth features to access online streaming services. Furthermore, this video projector is compatible with different devices, including laptops, DVD players, PlayStation, FireStick, Xbox, and many more.

Courtesy of the upgraded LED source technology, you can enhance your viewing experience indoors in a low-light environment. Furthermore, you can enjoy an image of 34 inches if you place the projector at a distance of 3.5 feet and a 180 inches image from a distance of 16 feet.

The advanced noise reduction technology ensures the noise level of the fan remains within 30 to 50db. Moreover, the cooling system maintains the projector’s internal temperature, thus allowing you to enjoy back-to-back movies with your friends.

It entirely depends on you to use the built-in 2W speaker or pair this video projector with an external speaker via Bluetooth connectivity. 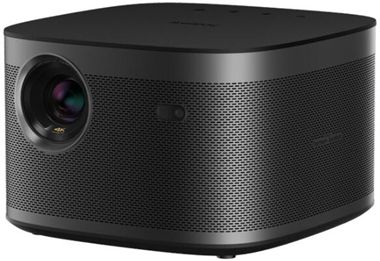 The XGIMI Horizon Pro is one of the best portable 3D projectors you’ll find on the market. Its unique, compact shape fits easily in a backpack or suitcase and weighs just over 6 pounds, perfect for on the go entertainment. You can also use it without any extra accessories since it has powerful built-in speakers and an integrated Android streaming interface.

Along with portability, the Horizon Pro gets high marks for ease of use. Part of this is its automatic image adjustment. The optical sensor automatically adjusts the focus, screen alignment, and image geometry based on the projector’s placement, and also optimizes the image based on the room’s light level. That means anyone can get a fantastic picture with the Horizon Pro, no matter your level of A/V experience.

While the XGIMI Horizon Pro isn’t a short-throw projector, it doesn’t need too much space to operate, producing a 100” image with just under 9 feet of distance. The LED light source isn’t exceptionally bright—you can leave a couple of lights on while you watch but it will be prone to washout in brighter spaces, especially since its image contrast is relatively low to start with. These limitations aside, it’s a powerful and versatile projector, suitable for gaming, 3D movies, and all your other entertainment needs. 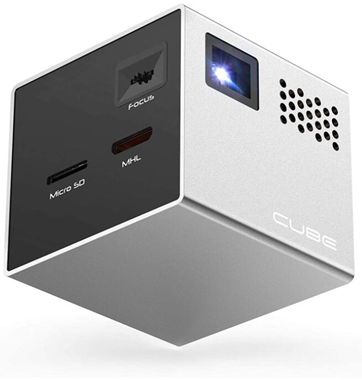 Coming up as number five on our countdown, we’re looking at TENKER’s own S6 Mini Cube. Equipped with DLP technology from Texas Instruments, this Cube DLP Projector brings razor sharp pictures and amazing videos with incredible color and brightness. It supports 1080p video files, but nothing higher, unfortunately.

The software is a Linux system with integrated WiFi. It’s actually running off of the 802.11a/b/g/n band for 2.4GHz networks. This means that you can do simultaneous screen mirroring and streaming with no issue. It also means that it works with both Android and iOS — using Miracast for Android devices, and then AirPlay for iOS devices.

The battery is the only disappointing factor here, though it’s hard to complain with how portable this technology is. You only get a 2,600mAh battery, which can only stream video for 1 to 1.5 hours. 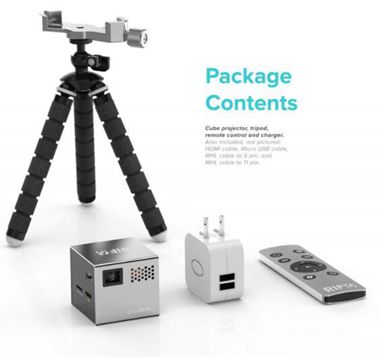 One of the smallest projectors yet, the RIF6 CUBE is a high-end, portable way that you can bring the movie theater experience almost anywhere. Even thought it’s tiny, you might be surprised to find out that it’s display reach is 120-inches, even better than the Nebula Capsule. Now, since it is so tiny, it doesn’t have a whole lot lumens inside — just 50, so you won’t be using this in a dark room.

On top of that, the RIF6 CUBE works well with Android tablets and smartphones; however, since it supports HDMI, it works with most HDMI-equipped devices, including laptops and gaming consoles. It weighs over 800 grams, so it’s not exactly the lightest projector either.

Small wireless projectors like these that support WiFi and Bluetooth are pretty pricey, but this is definitely one of the cheaper options on Amazon.

How do I connect a projector wirelessly?

You can connect a projector wirelessly by navigating to “Network” in the projector’s menu. Enter the password to the network you are trying to connect the projector to. If your projector requires wireless software to be installed from a disc, do so, then click “Finish” when the installation is complete.

Can I add wireless capabilities to my current non-wireless projector?

Even though a projector is wireless, it still requires a power supply to be turned on. Some projectors are “wireless” due to the fact that they do not require any wires to be connected to any other device, but still need the power cable in order to work. Other projectors are completely “wireless” because they do not need wires to connect to other devices and are battery powered, so they do not even require the power cable in order to function.