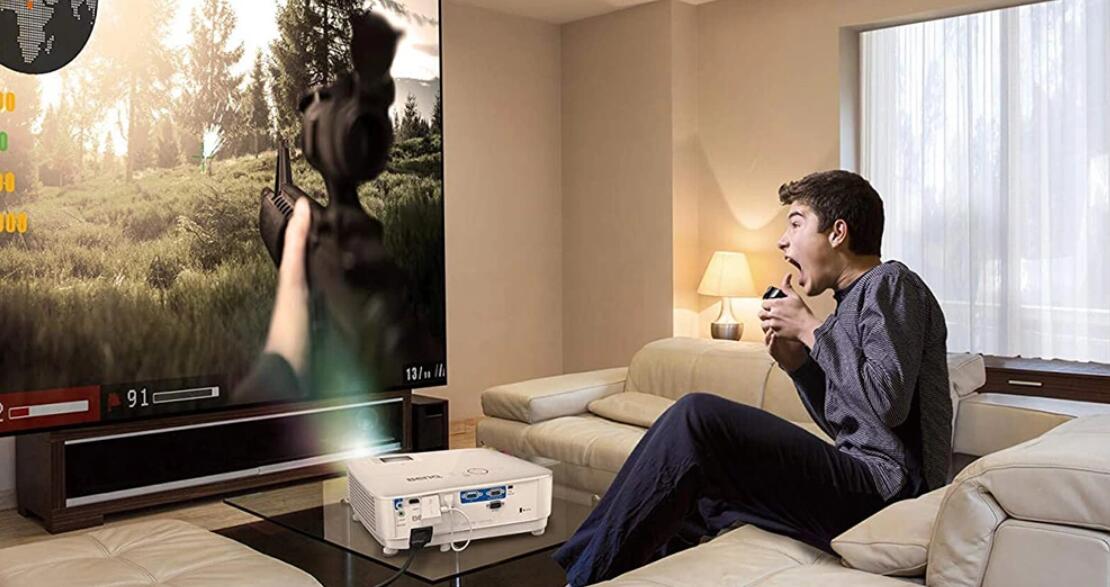 Short throw projectors are much smaller than conventional projectors, with a shorter distance required to project a large, clear picture onto a wall. They’re also perfect for conference rooms and classrooms since they need to be only a couple of feet away from the screen. For the purpose of this guide, we considered several important factors, including throw distance, display technology, contrast ratio, brightness, and resolution.

UST projectors have a throw ratio of less than 0.4:1 (hence the name ultra short). They have very wide-angled lenses to allow for the image to be “thrown” or projected from such a short distance. In the past few years, UST projectors have come to the forefront, becoming leaders in the projection space as they completely transform and enhance your experience. Offering compact flexibility, large screen sizes and great picture quality, this could be the best projector for you.

UST projectors are also referred to as Laser TVs. This is because they typically utilize a super bright laser light source to project the image upward on your display surface and because they’re designed to replace your flatscreen tv with a much larger image size. Thanks to their super bright laser light source, when paired with a compatible ambient light rejecting screen a laser TV works in well-lit rooms making them the perfect living room television replacement.

What Specs Matter with Short-Throw Projectors?

A good short-throw projector shares many of the same qualities as a TV, which means that you want to look for some of the same specs. These include:

Resolution: While 4K can provide noticeably more detail than 1080p, the difference between a good 1080p projector and an entry-level 4K projector is a little less noticeable, especially if you’re not in a pitch-black room. For most people, a 1080p short-throw projector will be more than suitable, and there are even 1080p projectors that can provide a modest bump in picture quality by downscaling 4K content, depending on the source material. Most of the projectors on our list are 1080p.

HDR Support: This is less important in a sub-$1000 projector since most of them don’t get bright enough to take advantage of HDR’s benefits. But if you’re eyeing a more premium projector, HDR is a “nice to have” feature.

Connectivity: All of these projectors have all the ports you need to connect a streaming box, Blu-ray player, video game console or cable box, which will be the only thing most people will need. But some have the ability to connect to the internet via WiFi or Ethernet to download streaming apps directly to the projector. A few even have ports to connect older, non-HDMI gear.

Sound: While most of these projectors have built-in speakers, in the majority of cases, you’re going to want to opt for a separate audio solution, especially if you want surround sound. But it’s worth noting many of these projectors lack any sort of digital audio out. If you’re planning to use a streaming device that lacks its own audio out, and you don’t want to bother with a receiver or HDMI audio extractor, this may be something to consider. 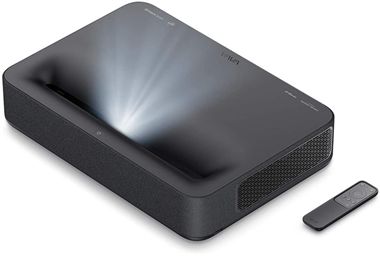 Balancing price and performance, the Vava 4K ultra short throw projector lights up any screen with a big, bright, beautiful picture. Its laser light source makes the resulting image particularly bright while offering a long 25,000 hours of life from its light source.

The 2500 ANSI lumens means that it’s suitable for use in a bright room, while the 3000:1 contrast ratio makes its picture quality look magnificent. Packing a 60 Watt Harman Kardon soundbar complete with Dolby audio and DTS-HD processing, the built-in audio works well for a self-contained home theatre experience. Image quality is absolutely outstanding with a bright, crisp image.

Although it’s a 4K projector that actually displays 8 million pixels on-screen, the chip inside isn’t a native 4K chip. Instead, the Vava relies on pixel shifting. 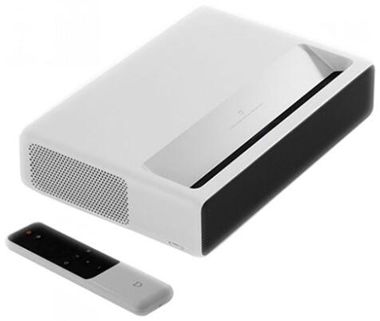 There’s a built-in subwoofer with a pair of 30W subwoofers and dual high-frequency tweeters. Because of the laser light source, you can expect a long 25,000 lamp life. Android comes onboard for streaming from apps. The image quality is spectacular. While the Xiaomi Mi laser TV relies on pixel shifting to achieve its 8 million pixel picture, colors are punchy and vivid with good brightness. 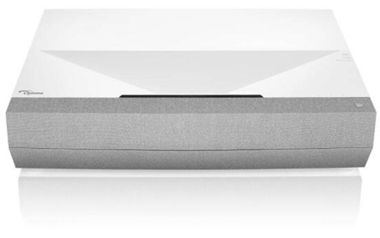 The successor to the Optoma P1 has a lot of new features compared to its predecessor and it comes in white color. The design and connectivity are similar to Optoma P1 but price a bit less which is great considering Optoma CinemaX P2 has better features.

Optoma CinemaX P2 is a pseudo 4K ultra-short-throw projector with laser-based technology releasing 3000 lumens theoretically which makes it one of the best ultra short throw projector for daylight in the market.

The current champion and the best ultra short throw projector is LGHU85LA with its remarkable features, but around $4k, Optoma CinemaX P2 a great alternative if we can just forget that awful aptoid. 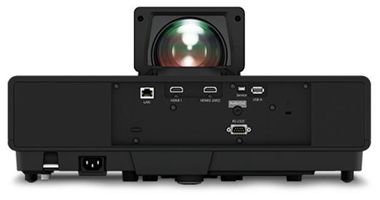 Epson Epiqvision LS500 is an epic laser-powered 4000-lumen short throw projector that is made for the living room. It a better TV replacement option.

Not only it is great for rooms with bright light penetration, but advanced 3-chip 3LCD tech will nullify any rainbow effect leaving a bright picture. It also uses pixel-shifting technology to produce pseudo 4K images, but I don’t think most newbies would tell the difference between a native 4K and pixel-shifted 4K.

The ambient light rejecting screen comes Epson Epiqvision LS500 will nullify all the ambient light that falls upon it. The image will be completely visible even in the well-lit room.

With 3000 lumens of brightness, this UST projector is one of the brightest available making it the perfect living room television replacement.

And while it doesn’t quite perform as well as the Samsung LSP9T triple laser UST, the Hisense TriChroma still delivers outstanding visuals at a lower price point (especially since it comes bundled with an ambient light rejecting ultra short throw projection screen).

When the Samsung LSP9T launched there was a tremendous amount of interest in this 4K UST. And it still astounds us.

The LSP9T is perfect for TV and film lovers who want a truly immersive cinematic experience. This top of the line Samsung ultra short throw provides a crisp image up to 130 inches.

The Samsung Premiere LSP9T is absolutely one of the best 4K UST projectors available on the market in just about every regard. Its triple laser technology delivers revolutionary contrast detail and provides a super bright image with incredibly radiant colors. 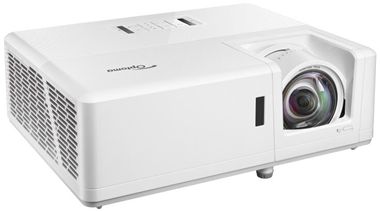 If you’re willing to take a step up in price, the Optoma GT1090HDR is a worthy choice that will perform great in any setting it’s used in. Rated for 4200 ANSI Lumens, this 1080p laser DLP projector is one of the brightest on the list, which means that you can place this in a brighter environment and still get image quality that isn’t totally dull or washed out. In addition to being able to project a 100-inch picture from 3.6 feet off the wall. And while the GT1090HDR is only a 1080p projector, it does support HDR 10 and will downsample content from 4K video sources, which could offer improved picture quality over regular 1080p content in certain scenarios.

But there are a few considerations here. Despite having some more advanced features than the BenQ HT2150ST, the Optoma GT1090HDR only has a four-segment color wheel, which means that in a dark room, the colors of the latter won’t be as vibrant as those of the former. The laser-based projection lamp also means that it will last longer before it burns out, but you won’t be able to replace it like you would a standard lamp. And like the BenQ HT2150ST, it lacks a digital audio out. It’s also considerably more expensive, but as we said before, projectors are a game of tradeoffs. 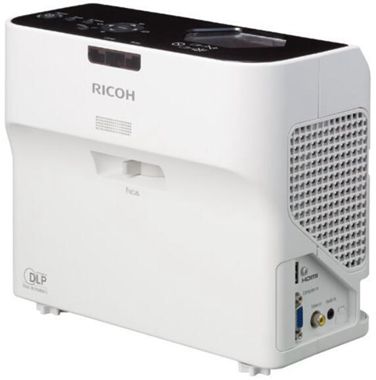 The Ricoh PJ WX4130 Ultra Short Throw Projector is an option when you want a number of connection options on a device.

The projector produces 2,500 lumens, so it is still capable of producing a quality picture when some ambient light is in the room (although generally, we like the lumens to be at least 3,000 for playing during the day without a dark room).

One of the benefits of the Ricoh PJ WX4130 Ultra Short Throw Projector is you only need to have it about four feet from the projection surface, which is good when you don’t have much space to work with.

Don’t allow this projector’s low price to deceive you because this model actually packs the capabilities of high-end models. It comes with 3D support, incredibly comprehensive visuals, and a very smart design to improve your movies experience.

This short throw projector can be effortlessly linked to 3D Blu-ray devices via its HDMI ports, thereby allowing you to watch movies with much more details by wearing 3D glasses. The manufacturer has also included SuperColor Tech which provides 3 color segmentation. As a result of that, you get to see true, sharp colors in rich details. Besides, you will be able to see all the specifics in brighter and darker settings, without any decline in the quality of the image.

It’s also worth mentioning that this projector comes with 5 view modes. These allow you to tailor your viewing according to the darkness and brightness of your environment. The Smart Design allows you to handle any wires easily. The projector has a section at the back where those annoying cables can be stored away. There is also a lamp door at the projector’s top to access the lamps easily if required. 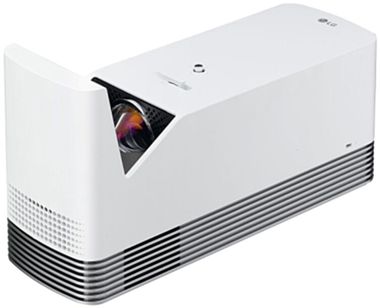 This projector comes with the capability of producing a contrast ratio of 150,000:1. At this price range that is an exceptional contrast ratio.

You also need very little in the way of space to use the LG HF85JA Ultra Short Throw Laser Smart Home Theater Projector. In fact, you can project a clear 100-inch screen from just 4.7 inches away. Optimal placement is 17 inches from the wall for a 100 inch projected screen.

Lumens are at 1,500, so you’ll want to avoid using this projector in sunlight. To fully take advantage of the high contrast ratio you’ll want to be in near, if not complete darkness.

One of the best features on the LG HF85JA Ultra Short Throw Laser Smart Home Theater Projector is it runs LG’s Smart TV platform. This way with an available Wi-Fi connection you can stream your favorite apps without connecting any secondary devices.

Are short-throw projectors any good?

Short throw projectors are a great alternative to HD TVs when it comes to cinematic picture quality experience from the comfort of your home. Their closer proximity to the screen reduces the shadows and glare from the light source ensuring a high-end video quality.

Yes. A short-throw projector does require some sort of a screen. The most commonly used screen is the UST. These are special screens that throw the image straight back into the room without letting any ambient light wash out the image.

How do I choose a short throw projector?

When choosing a short throw projector, you must look for the projector that comes with the best specs deliverable within your price range. Some of these specs include brightness, video quality, and resolution, image size, contrast ratios , and inputs.

Are short throw projectors better than regular ones?

Typically, the shorter throw of the projector screen implies that the projector is close to the screen that is displaying the images. This usually results in increased brightness and color accuracy.

Does a short throw projector work with a ceiling mount?

It’s possible to mount the short throw projector on the ceiling, but the placement is neither intended nor recommended. The results will either be poor video quality or a really difficult setup owing to the lack of proper hardware.