DProjector has long strived to be our industry’s leading authority on all things projectors, including the newer class of projectors referred to as Laser TVs. Our goal is to provide the most in-depth reviews on the web. Here you will find detailed reviews of home theater projectors (including short and ultra-short throw projectors), business projectors, education projectors (for K-12 and higher education), as well as portable projectors, pico projectors, and pocket projectors. Our mission is not only to identify the best projectors available, but to provide enough information for you to choose the projector that is right for you.

Many of our latest reviews include new generations of LED and Laser projectors, in addition to traditional lamp-based models. For the home, we review both home entertainment and the more serious home theater projectors, ranging from entry-level to 1080p with pixel shifting, 4K UHD, and high-end 4K projectors. In addition, to ensure you have all information you need to design a high performance projection system, we also review projector screens and accessories. We offer a large database of projector specifications, datasheets, and brochures for you to compare, helping to narrow down your search for the perfect projector.

Simply put, when it comes to watching movies or playing video games, bigger is always better. Sitting at appropriate distance from a 100-inch or larger image engages more of your peripheral vision, lets you see details that are lost on most TVs, and sucks you into the story in a way that’s just not possible with even a 75- or 85-inch flatpanel. If you turn off your phone like you do down at the cineplex, it makes movie viewing a true escape.

Try this demonstration. Stand by your window and take in the outdoor scene in all its action and glory—the width, depth, and breadth of it. Now step back 10 feet and look through the same window. The scene is the same, but shrunk, and you’re viewing through a picture frame. This is how most people watch on a 55- or 65-inch TV.. What they’re really seeing is an image of their home furnishings surrounding a window with tiny figures dancing about in it. This is why no one would ever mistake watching TV with being at a movie theater.

On the other hand, a projection home theater is very effective at mimicking the theatrical experience and its high level of engagement. And projectors remain—by far—the most cost effective way on a per-inch basis to attain pictures of 100-inch diagonal or larger.

Unlike a TV, a projector is really a two-piece system: the projector and the screen. Projector screens come in a variety of sizes, with surfaces that are optimized for different projectors and room lighting.

Home theater projectors typically have fewer inputs than TVs, and most lack any type of built-in tuner or internet capability. Most projectors have two HDMI inputs for connecting Blu-ray players, satellite receivers or cable boxes, video game consoles, and media streamers like Apple TV® and Roku.

Actually, most projector owners, myself included, still own at least one TV, too. The projector experience is great for movies, or any other viewing where you’re really immersed in what’s happening on the screen. But if you just want to catch a few minutes of news before bedtime, firing up a projector rig can be a little inconvenient.

What to Look for When Buying a Projector

The Projectors have long been used as a presentation tool in business and commercial entertainment, as well as in some high-end home theater systems. However, video projectors are becoming more available and affordable for most people. Check out some of these useful tips before you buy your first projector.

Variants of LCD technology include: LCOS (Liquid Crystal on Silicon), JVC’s D-ILA (Digital Imaging Light Amplification), and Sony’s SXRD (Silicon Crystal Reflective Display). With LCOS/D-ILA and SXRD projectors, the light source is reflected off the 3 LCD chips, instead of passing through them.

In addition to LCD and DLP technology, you should consider whether the light source in the projector is a ​lamp, LED, or laser. All three options have their advantages and disadvantages:

Compare video projector light source life with an LED/LCD or OLED TV, which can last over 60,000 hours, albeit with smaller screen size.

Without sufficient light, a projector will not be able to display a bright image. If light output is too low an image will look muddy and soft, even in a dark room. The best way to determine if a projector outputs enough light to produce bright images, check the ANSI Lumens rating. This will tell you how much light that a projector can put out.

Relatively speaking, projectors with 1,000 ANSI Lumens or greater have sufficient brightness for home theater use. Room size, screen size/distance, and ambient room light connections will also affect the need for more or fewer lumens. Although video projectors’ light output capabilities have improved, they still work best in a darkened room.

Pixel Density (aka display resolution) is important. LCD and DLP projectors both have a fixed number of pixels.

If you want to jump into 4K territory, aside from the higher price tag, not all 4K projectors project true 4K resolution. It is important that you understand how 4K video projectors work and how they are labeled so that you can make the right choice for a home theater setup.

Most new projectors have a USB connection that will let you power a streaming stick which plugs into an HDMI input.

One option to consider is fiber optic HDMI cables. These have HDMI connections at either end but send the signal optically. These are typically thinner than long-run copper cables. Monoprice has some options for around $2.50 per foot, compared to $0.70 for an equal-length, equally-capable copper cable.

Another option is wireless. These are typically more expensive than cables, and might not offer the resolution/frame-rates you’re looking for. Some will drop the signal if you walk between the transmitter and receiver, and won’t work if placed in a cabinet.

Do You Need a 4K Projector? 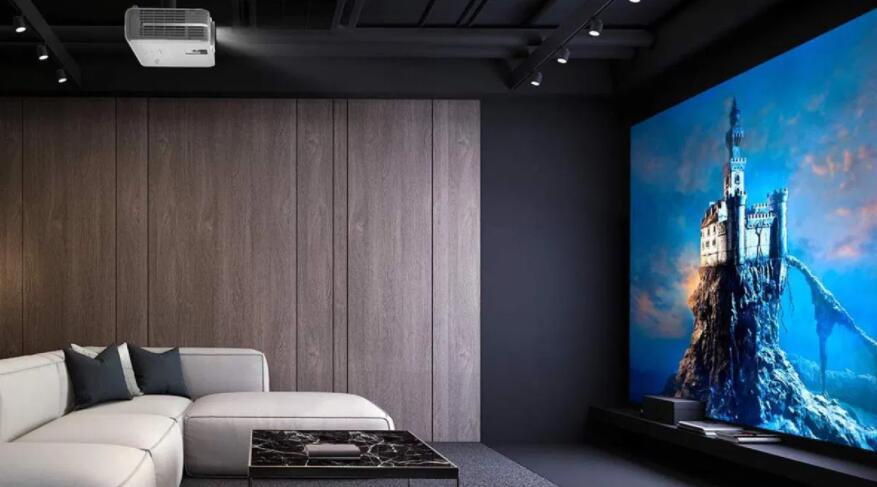 Currently, the main feature that separates a $600 projector from a $1000+ projector is its resolution. For awhile, a screen being “high definition” meant that it played video at a resolution of 1920 x 1080 pixels. Then in the early 2010s technology took a leap forward and the standard for “high definition” became what is known as 4K resolution, or 3840 x 2160 pixels.

4K is almost four times the resolution of the old standard for high definition, resulting in sharper, cleaner and more vibrant images onscreen. But is a 4K projector worth the added price? It depends.

If you’re planning on using a new 4K Ultra HD Blu-Ray player in your home theater to watch all the latest releases at the best picture quality possible, then you’ll have to spend a little more for a 4K projector to realize your Blu-Ray player’s full potential. But if you’re more into older movies or streaming video, then the resolution doesn’t matter as much.

To the untrained eye, the difference between 4K and lower resolutions on a projector will hardly be noticeable. Just make sure that whatever projector you buy supports a resolution of at least 1920 x 1080.